· Registered
Joined Mar 25, 2009
·
39 Posts
Was hoping someone here could help me with a weird issue I had replacing a broken front wheel stud. 2005 ZX3 hatchback. Broke the stud, hammered it out, went to autozone and bought a replacement. Confirmed the part number was correct for my car (Dorman 610-340.1), but when installing I couldn't get the head of the stud to "seat" in far enough to catch and be able to pull through with the washer/lug nut method. No matter what I tried, wrench or impact, it won't get in far enough and just spins.

Stopped and compared the new stud to the old one and they look pretty different to me. When I put the old stud back in the hole it goes in far enough where if it feels like it would pull through fine (other than being broken in half).

This same Dorman 610-340.1 is about all I see locally for a replacement. Is there another that I'm not seeing that matches the (assumed) stock stud? 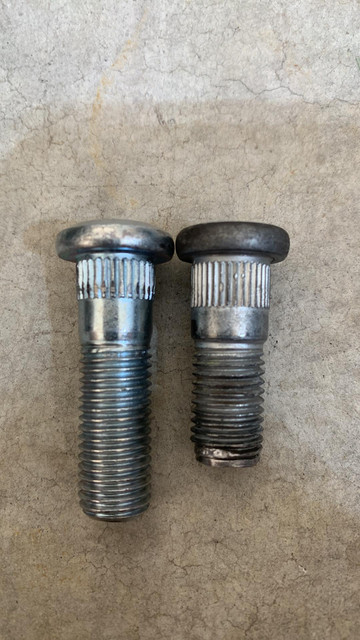 · Registered
Joined Sep 20, 2006
·
10 Posts
Found some for sale at Rock Auto.Here are specs for Dorman.This shouldn't be that difficult a problem.Put some glue/adhesive on the serrations and then use spacers/washers and lug nut.Tighten with wrench.It has to either go in or break.